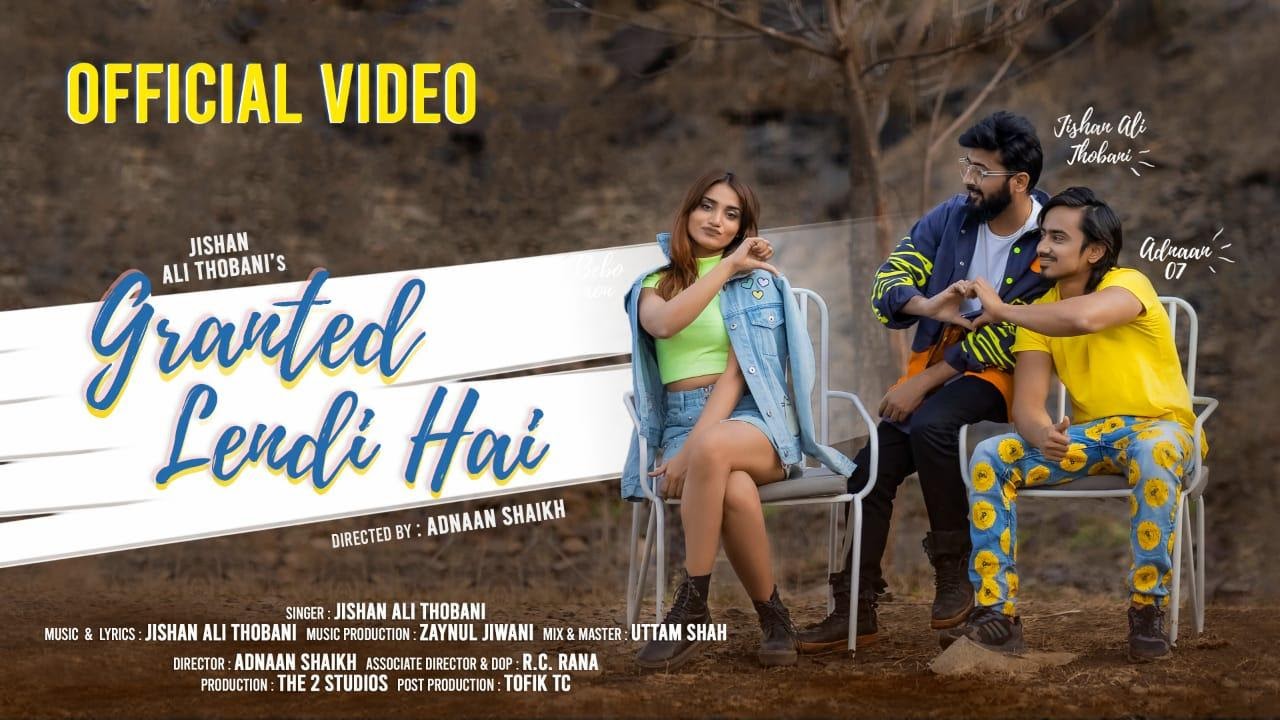 Featuring Adnaan Shaikh and Bebo Memon in lead roles, the song is written and composed by Jishan Ali Thobani

Written and composed by multi-talented Thobani, the music video has been shot in the singer’s hometown Chhindwara showcasing the simplicity and beauty of a small town. The music video shows a sweet love story revolving around a young couple.

Directed by Adnaan Shaikh of Team 07 fame, the music video has a fun and flirty vibe and the chemistry of the lead pair works like icing on the cake. This video shows Adnaan in a chocolate boy avatar, different from his usual 'Sher' image. The video is inspired by Jishan's real-life story, where he teases his fiancé - for taking him for granted for small things knowing that he loves her the most and so does she, and that’s how he came up with the idea of creating this beautiful song.

Excited about the release, Thobani stated, “Granted Lendi Hai, is a very special song for me as it's my first commercial song and I am really thankful to the Qyuki team for supporting me throughout this journey. The video is directed by the digital sensation Adnaan Shaikh and I am really grateful to him for coming on board and believing in me. We have put in a lot of hard work and hope that everyone enjoys it as much as we did and shower all their love and support for this new track.”

Talking about the release, Adnaan Shaikh stated, “Granted Lendi Hai is a wonderful track sung by Jishan. The song is notorious with humorous storytelling and I feel proud and excited to get to be directing this music video. Jishan is like my brother, we both make a great team and it was fun working with him. I couldn’t have asked for a better team. I hope everyone enjoys the song as much as we did while creating it”

Produced by - The 2 Studio

Co-Founded by Samir Bangara, A.R.Rahman and Shekhar Kapur, Qyuki is a data-driven new media company which discovers & invests in India’s most influential creators to help them rapidly grow their audience, create content and launch new IPs. Qyuki has to its name several premium formats like ARRived - a singing talent hunt show with A. R Rahman as a mentor, Jammin’ - a collaboration-focused music show where legendary Bollywood composers and India’s top Internet icons create original tracks - and NEXA Music - a nationwide talent hunt for English-language singers. In Jan 2020, Qyuki created a breakthrough format of fan festival called Epic Fam Jam, which brought together India’s biggest online sensations - in thematic mini-worlds of their own for superfan meetups - topped with incredible live performances. Qyuki also exclusively manages a host of talent across various digital platforms including Youtube, Instagram, Snapchat and Josh.