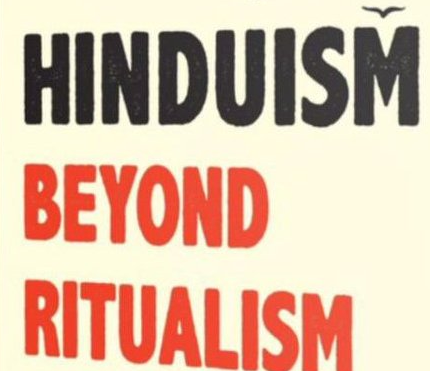 Mumbai, 5th April 2021: Present Principal Secretary of Home Department of Maharashtra, Vineet Agarwal has recently penned his third book–Hinduism Beyond Ritualism.  The book weaves the various concepts that broadly define Hinduism in a simple and interesting manner. The ancient Hindu texts and Upanishads have been explained succinctly without any lengthy commentary by the author who is acclaimed for his critical writing.

His oeuvre includes critically acclaimed works like Romance of a Naxalite and On the Eve of Kalyug, both widely recognised for his unique approach towards writing, besides cementing his credentials as a writer.

An engineer by training from the prestigious IIT-Delhi with a post-graduate degree in Management, Vineet Agarwal has had a storied career in the corporate world before he decided to join the elite Indian Police Service (IPS). During his distinguished career as a senior police officer, he held important positions in the government of Maharashtra, the Central Bureau of Investigation (CBI), and the government of India. He is the proud recipient of the prestigious President's Police Medal for his Meritorious Services as well as the Internal Security Medal from the Ministry of Home Affairs, Government of India.

Hinduism Beyond Ritualism makes no effort to reconcile the various Hindu philosophies and it is left to the readers to make their interpretations, states Agarwal. "Hinduism is not a religion, rather it is a term used to describe the belief system prevalent in the Indian subcontinent at a time when there was no concept of a formal religion. The book, in a way, is an effort towards helping the Hindu as well as non-Hindu readers get an idea about the true meaning of the Upanishad. While citing various anecdotes from the religious scriptures, an attempt has been made to clear various concepts such as implications of our actions, after-life and reincarnation, among others, There are, however, no exaggerations of any sort and there is no attempt to build logic to influence the reader in any way," he says.

The 253-page book has been carefully divided into 30 chapters and as an effort to establish a connection with the reader at the end of each chapter there are multiple-choice questions on the core concepts. The few of the chapters listed include topics such as Charak School, Ish Upanishad, Kena Upanishad, Brahma Sutra, Chakras and Kundalini, Ayurveda and The Hindu Way of Life to list a few.

Published by The Write Place, an initiative by Crossword Bookstores Ltd, it has been lauded by eminent personalities such as MP Subramanian Swamy, Mr. Anand Mahindra, Mr. Amish Tripathi, Mr. Vishal Bharadwaj, Ms Shobhaa De, Ms. Poonam Dhillon, and many others. Within a month of the launch, the book has hit the top 100 chart.  It tops the chart in the category assigned by Amazon.