Gajendra Verma’s First ever Music Series 'Summary' by is all things love, drops an episode ‘Mushkil Badi’ from the series 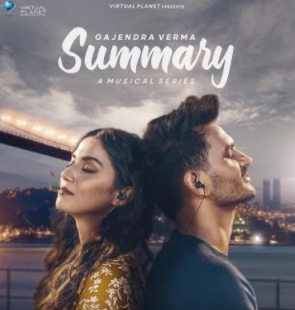 Mumbai, __ February, 2020:  The month of romance is here. Everyone is feeling the love in the air and can't keep calm. Series of proposals and heart connections are on the mark. Adding to the moment, the Pop Singer - Gajendra Verma, Qyuki’s Artist collaborated with Virtual Planet Music welcomed and celebrated the month of love with a lovely and heartwarming series of the songs titled "Summary - A Musical Series".

The trailer of the song was released on YouTube and in a day the video received over lakhs of views. Similarly every song is set to create a mass hysteria right upon its release with immense views on YouTube. One can comprehend the craze of the singer and his songs. The summary encapsulates the 5 songs. A simple love story but an extraordinary way of redefining it. The first song 'Mushkil Badi', is released on 1st Feb. It is a happy foot tapping number that will make you hit the dance floor immediately. The following songs are as follows - 'Kitna Maza Aayega' released on 4th Feb, 'Ratjage' on 8th Feb, ‘Pehla Pyar’ on 11th Feb and the last song of the musical series which is known as 'Aaj Phir Se' will be released on the Valentine's Day.

Co-Founded by Samir Bangara, A.R.Rahman and Shekhar Kapur, Qyuki is a data-driven new media company which discovers & invests in India’s most influential creators to help them rapidly grow their audience, create content and launch new IPs. Qyuki has to its name several premium formats like ARRived - a singing talent hunt show with A. R Rahman as a mentor, Jammin’ - a collaboration-focused music show where legendary Bollywood composers and India’s top Internet icons create original tracks - and NEXA Music - a nationwide talent hunt for English-language singers. In Jan 2020, Qyuki created a breakthrough format of fan festival called Epic Fam Jam, which brought together India’s biggest online sensations - in thematic mini-worlds of their own for superfan meetups - topped with incredible live performances. Qyuki also exclusively manages a host of talent across various digital platforms including Youtube, Instagram and TikTok.