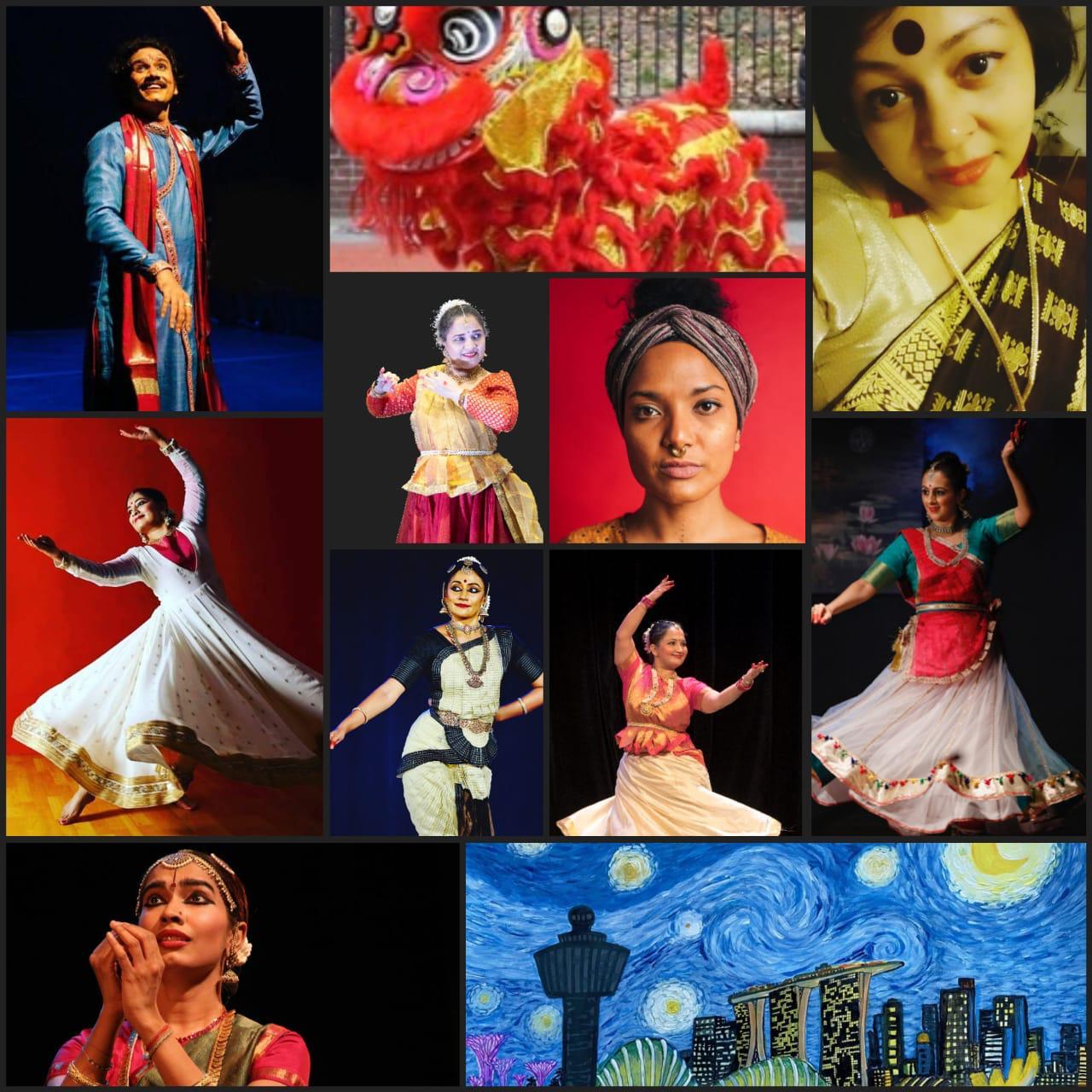 Bhopal, November 13, 2020: The culture, art and literary heritage of 16 countries across the world was celebrated in a grand manner at the recently concluded Vishwarang International Festival 2020. The event was held online as a precursor to the second edition of the Tagore International Literature and Art Festival, also known as Vishwarang, that will be held from 20th November to 29th November as a unique literature, arts and music festival in India that focuses on art and literature not only in English but in Hindi and regional languages as well.

Apart from India, the countries that participated in Vishwarang International Festival 2020 are; the UAE, the USA, Australia, Canada, Netherland, Singapore, Russia, Uzbekistan, Sri Lanka, Fiji, Ukraine, Sweden, Kazakhstan, the UK and Bulgaria. More than 100 artists and 1 lakh people around the world joined the Festival.

Speaking about the Festival, Mr Siddharth Chaturvedi, Co-Director, Vishwarang, said, “This event wasn’t just about education or knowledge; it was about harmony and diversity as well. For three days, literary personalities and artists from the 16 participating countries joined hands to enlighten one another about their country’s art, culture and literature. I am glad that the Vishwarang International Festival acted as a platform where so many people were able to widen their horizons and improve their intellectual awareness about the cultural and literary heritage of various parts of the world.”

Vishwarang USA displayed a range of cultural performances and discussions focusing on Dance (Odissi), Song, Gazal, Rhythm and Music, which mesmerized the audience present at the event, including (Classical singer and disciple of Padmabhushan Girija Devi) Sanjukta Sen. The event further witnessed the presentation of Urdu storytelling art form, Dastangoi, famous Indian classical dance form Kuchipudi and a Youth Talent in the fond memory of Author Susham Bedi. Following these programmes, a session was organized on Rabindranath Tagore and Muhammad Iqbal. Moving ahead, the event observed a book launch and introduction with the artists present. Discussions on topics such as Indian Music, Bollywood and Dance were also held. A fusion of Odissi Dance with Bollywood, Kathak, Contemporary, Bhangra and Hollywood songs was also performed at the festival.

Vishwarang Canada not only had discussions about Indian Authors and Writings but also organized a Kavita Chaupal, a short film screening and a session on Literature based on Science, which was named as Gyaan se Vigyaan Tak. In his session, Dr. Ratnakar Niralay, who has written 40 books till date, said that he has been working for the development of Hindi literature and culture since the past 50 years. Earlier he used to write and share handwritten magazines but with the help of computer, it has now become easier.

During Vishwarang Australia, a discussion was held on the importance of migrants in building good cultural relations between India and Australia. On this topic, Indian Link Media Group’s CEO Mr PawanLuthra said, "The relation between the two countries depends on different factors; these factors may include political, cultural, economical and sports. Mutual harmony between the people of these countries plays a major role for a good relation between the countries. According to a report, more than 7,050 Indians give their hands to the economy and development of Australia. According to the report, by 2031 the number of Indians in Australia will reach around 1.4 million, which will be more than the number of Chinese staying in Australia." Other key highlights of Australia session were Sarod Vadan, poetry sessions, a panel discussion on strong relation between India and Australia, Bharat Natayyam and Kathak performances, Yuva Kavi Sammelan and Mushairas.

Vishwarang Netherland was a combination of regional songs, classical music and dance, Rabindra Music, flute performance, poetry sessions and book launch. During the programme, Dr. Soni Verma (Teacher of Hindi and Sanskrit. Also, working in the field of Hindi Literature and Classical Music to promote it in Netherland) made everyone aware of the importance of cycle and how the Government is encouraging everyone to go for cycle in order to save the nature. She said, "During the World War II, the Government of Netherland understood the importance of Bicycle and how it rebuilt the city. On a daily basis, people travel to their office and workplaces via bicycle and this results in their good health."

Vishwarang UK had sessions on Hindi writers, performing arts and Hindi Kavya Saahitya. The Hindi writers present in the sessions were Archana Panauli, Mamta Gupta, Mohan Rana, Divya Mathur, Anil Sharma, Piyush Dwivedi, Achala Sharma, Dr. Shayam M Pandey and Shefali Frost. During the session, Anil Mathur shared Divya Mathur's specialty, which is her writing being women centric, and how the portrayal of women in her stories is developing with each story. One of the key sessions of Vishwarang UK was a symposium with Hindi writers from the UK. Usha Raje Saxena (UK based Prominent Hindi Writer), said, "I and Padmesh did the job of promoting Hindi language literature at a time when people had inferiority complex about the Hindi language. My books ‘Clay Fragrance’ and ‘Hindi in Britain’ are the first books through which British Hindi writers got entry into Indian Hindi literature." Vijay Rana's documentary was also screened at Vishwarang UK. This documentary is made on the Kashi Vishwanath Temple.

During her talk, Dr. Pradeep Srivastava (UAE based Senior Journalist and Founder and Editor of Travel Magazine ”Pranam Paryatan” ) expressed her views on Hindi and Travel Journalism. She said, "Everybody loves to travel but not everybody who travels, writes about it. This is wrong. We see and experience a lot of beautiful things with our eyes but we do not keep them for our next generation. To write about our experience is an important part of our cultural heritage."

On the last day of the Festival, Vishwarang Sweden showcased various cultural programmes such as Bhav Tarang, Geet-Gazal, Iqbal and Atlantic to Pacific. Vishwarang Sweden also included a conversation between Hinge Warner Vestler and Archana Panauli.Following this segment, Vishwarang Trinidad had Rhythm, Music, Dance, Youth Talent and an introduction with the artists present. Apart from that, several other programmes were organized in Ukraine, where discussions on Dance and Book launch with Dastangoi were held in the memory of Susham Bedi. In Bulgaria, Usha Sharma spoke to the Indian Ambassador Pooja Kapoor, who is also a famous singer, composer and producer. Similar programmes, which included discussions on Hindi literature and Indian Culture, were organized in Sri Lanka and Kazakhstan.

Vishwarang International Festival 2020 was organized by Bhopal-based Rabindranath Tagore University (RNTU) in partnership with the other educational institutions under the AISECT Group of Universities. The Festival was organized in association with a global network of organizations and NGOs working towards the promotion of Arts and Culture in Hindi and other Indian Languages across the globe. These include Parikh Worldwide Media, UK Hindi Samiti, Bharatiya Vidya Bhavan (USA), ITV Gold, TV Asia, New York University, Indira Gandhi National Centre for the Arts and National Book Trust (India) among others.