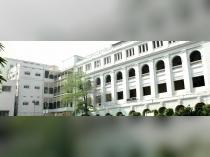 Why Join UNIVERSITY OF CALCUTTA, KOLKATA

The University Of Calcutta, Kolkata is also known as Calcutta University is a public State University located in Kolkata, West Bengal. It was established on 24 January 1857 by the Act of Legislative Council of British India. It is the first institution in South Asia to be established as a multidisciplinary and western style university. The University began functioning on the pattern of the University of London initially but eventually introduced its own modifications. The University still commands one of the top positions in the country providing quality education in UG, PG and Research Courses.