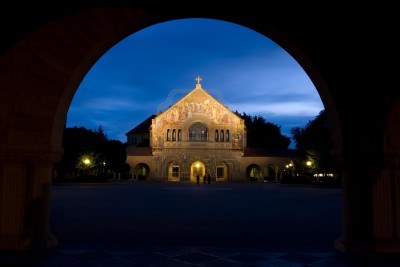 The university is organized into seven schools, including academic schools of Humanities and Sciences and Earth Sciences as well as professional schools of Business, Education, Engineering, Law, and Medicine. Stanford has a student body of approximately 7,000 undergraduate and 8,900 graduate students.Stanford is a founding member of the Association of American Universities.Stanford competes in 34 varsity sports and is one of two private universities in the Division I FBS Pacific-12 Conference. Stanford has won 104 NCAA championships (the second-most for a university), and Stanford's athletic program has won the NACDA Directors' Cup every year since 1995.

Leland Stanford Junior University opened on October 1, 1891 to 559 students. On the university's opening day, Founding President David Starr Jordan said to Stanford's Pioneer Class: "[Stanford] is hallowed by no traditions; it is hampered by none. Its finger posts all pointStanford was founded by Leland Stanford, a railroad magnate, United States Senator, and former California governor, and his wife, Jane Stanford. It is named in honor of their only child, Leland Stanford, Jr., who died in 1884 just before his 16th birthday. His parents decided to dedicate a university to their only son, and Leland Stanford told his wife, "The children of California shall be our children." The Stanfords visited Harvard's president, Charles Eliot, and asked how much it would cost to duplicate Harvard in California. Eliot replied that he supposed $15 million (in 1884 dollars) would be enough.

Master of Science in Aero/Astro

The Master of Laws (LLM) Program

Doctor of Science of Law (JSD)

Master of Science in Bioengineering