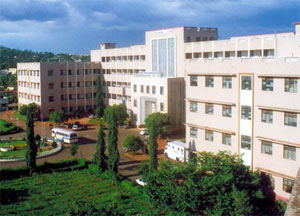 The present KARNATAKA INSTITUTE OF MEDICAL SCIENCES, HUBLI,( K.I.M.S. HUBLI.) was earlier known as theKARNATAKA MEDICAL COLLEGE, HUBLI. It was established in AUGUST 1957.For initial few years, the college was functioning from a building which is now known as J.G.Commerce College. Later, it was shifted to the present beautiful campus comprising of 100 acres of land, situated on Pune – Bangalore National Highway, Vidyanagar, Hubli.Unfortunately, over a period of time, due to many reasons, there was a progressive decline in terms of staff strength, facilities,and subsequently the services that was provided by the Institution.For almost seventeen years there were no new recruitments. The Institute was almost on the verge of getting de – recognized by the Medical Council of India.The Government of Karnataka immediately constituted a Governing Council and in JUNE 1997, the then KARNATAKA MEDICAL COLLEGE was accorded the Autonomous status, and so was born, the present KARNATAKA INSTITUTE OF MEDICAL SCIENCES, HUBLI.This was done with an aim to achieve the objectives of providing comprehensive Under – Graduate & Post – Graduate, medical & paramedical education in various subjects & developing the facilities for research, training, screening, diagnosis, treatment, rehabilitation, palliative & preventive care for the society at large.Since then the Institute has shown tremendous progress towards achieving this goal. It has now got a sufficient well trained staff strength.

n earlier days the students used to toil for hours together, searching in hundreds of books and journals for appropriate research material and Information , but now, the same can be accessed with a mere click of a mouse. The college now houses a wellequipped Digital Library, which has become a very popular academic hub of the institute.There are 16 Computers having Broad band internet Connection, with the help of which one can browse the internet and get the required information pertaining to studies, research and innovations in the medical field.

Doctor of Medicine in General Medicine