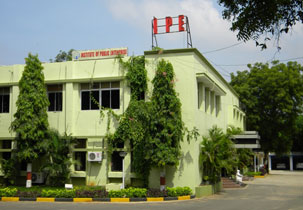 Why Join Institute of Public Enterprise

Institute of Public Enterprise Hydrabad ,The Institute of Public Enterprise (IPE) was established in 1964 for the study of issues and policies relating to public enterprises (PEs).  Shri.S.S Khera, ICS, the then Cabinet Secretary, Government of India, had conceived the idea of a research institution that would undertake a systematic and sustained study of issues relevant to the formulation of policies towards public enterprises. In the early sixties, when PEs were designed as the principal instrument to serve the social and economic objectives of development, Shri. Khera felt that there was need for an institute which would collect relevant information and documents on PEs, study specific issues and undertake consultancy and training exclusively for PEs. Dr.V.V. Ramanadham, the then Professor and Head of the Department of Commerce, Osmania University, translated Shri Khera’s concept into a reality that is IPE, with the active support and guidance provided by the late Dr. D. S Reddy, then Vice-Chancellor, Osmania University as an autonomous, non-profit society at the initiative of the then Cabinet Secretary to the Government of India, Shri S.S.Khera, ICS, and late Dr.D.S.Reddy, Vice-Chancellor of Osmania University. The Indian Council of Social Science Research (ICSSR), Ministry of Human Resource Development, Government of India, recognized the Institute as a ‘Centre of Excellence’ in social science research in 1976.  The Institute is partly funded by the ICSSR and the Government of Andhra Pradesh.The Institute is located in a picturesque greenwood area at Hyderabad in Osmania University Campus. Over the last 40 years, the Institute has widened the area of its work. Starting with research, the Institute soon found itself having to undertake consultancy for PEs and responding to the training needs of the executives of PEs and various educational programmes.The Institute became a pioneer in the field of computerization, assisting the Government of Andhra Pradesh and several other states in formulation of computerization policy, developing software for PEs and public systems, and on the use of computers as a decision support system.The educational programmes of the Institute have their basic foundation in the various research, training and consultancy activities undertaken by the Institute for public and private organizations/industries over the last four decades. The programmes are the natural extension of the educational activities of the Institute from the short term management education to the long-term one and have lead to vertical integration of the research function. The insights into management education began in 1981 with the commencement of a 3-year part time MBA (PE) programme for practicing managers. In the year 1995, the Institute started a two-year full time Post Graduate Diploma in Business Management (PGDBM), recognized as equivalent to MBA by the Association of Indian Universities (AIU), to provide skilled human resources to meet the requirements of the Industry. Consolidating on the experience and to meet the needs of the industry, the Institute commenced  two-year full time Post Graduate Diploma in Management - Retail and Marketing (PGDM-RM) in 2007 and Post Graduate Diploma in Management - Banking, Insurance and Financial Services(PGDM-BIF) in 2008. These courses are recognized by AICTE. These insights have led to the creation of a niche for itself in the conduct of the PGDBM course. IPE’s long association with the Indian industry has been responsible for its pre-eminent position in the area of management education.

The Institut has an excellent infrastructure for its activities with facilities like: